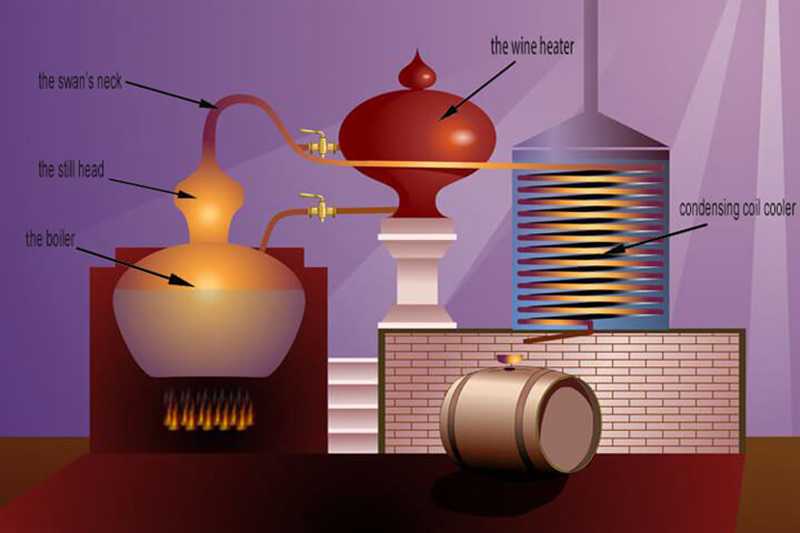 2. the still is made up of three essential parts

3. the wine heater is an optional element for preheat, thereby saving time and energy.

4. the white wine collected from the delimited production region is introduced into the boiler

5. the wine is brought to boiling point

6. alcohol vapors are freed and accumulate in the still head, while the most volatile pass through the swan’s neck

7. finally arriving in the condensing coil

8. upon contact with the cold water, they condense and form a cloudy liquid known as “bouillis”

9. this liquid, which has an alcohol level of 27 to 32% is then returned to the boiler for a second distillation.

10. the first liters of distillate obtained from the second distillation or “bonne chauffe” are referred to as the “heads”. They have a high alcohol content between 82% and 78% abv) and are separated from the rest

11. as the “bonne chauffe” continues, the degree of alcohol in the distillate reduces. After the “heads”, the distiller obtains the “heart”, a bright, clear liquid that will produce cognac.

12. the “second cuts” are produced after the “heart”. These are redistilled with next batch of wine or “brouillis”. The last part of the distillate to run off are the “tails”.

13. the heart of the “bonne chauffe” is then put into oak barrels to begin its ageing process.